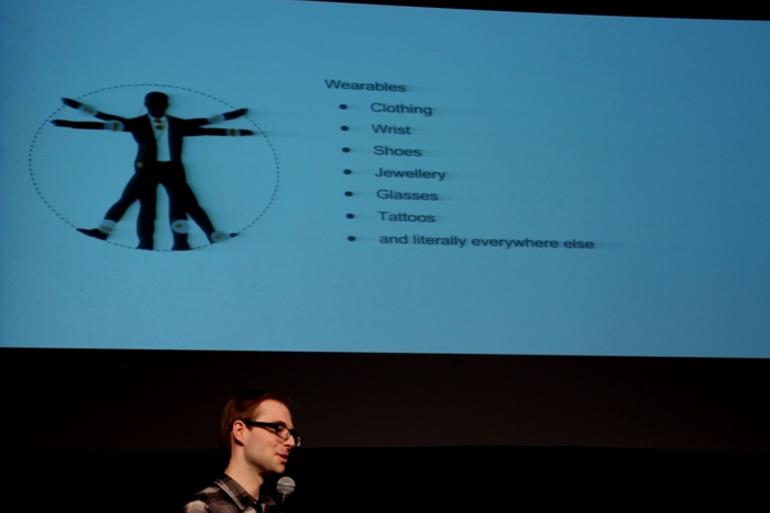 Do you remember what was the first tech device you had, or the first smart device you carried? You might be the one who had a big PC unit and a big mobile phone, before smart phone became a must device for everyone to have and even to carry whenever we go. Nowadays when everyone already has one smart phone or even more, people want to have and to wear something different to help their lives and to be seen more fashionable, maybe. Exactly, this is no longer about carrying something, but now it is about wearing something, that is smart and slim, and will be seen nice to be put on our body matched with the occasion.
Ethenia Novianty Windaningrum
FacebookLinkinTwitterGoogle+

According to Wikipedia, “Wearables are miniature electronic devices that are worn by the bearer under, with or on top of clothing.” And according to Tom Quast from Creative Vikings, nowadays there are 5 qualities that wearable technologies bring of which they haven’t been like these before, which are:
1. Portable while operational
Of course people buy electronic devices because they have certain functions, but now they are more than that; they also need to be portable.
2. Hands-free use
Because we want to wear them and use them in the most convenient way, these devices have to be ‘hands-free’ when we use them. We can use it while we put it in our wrist or in our eyes, for instance. Oh, and they might need to be slim to be more handy too, maybe.
3. Sensors
When we always need to press a button to check something while we are busy walking, this might come a little bit unhandy. Thus, sensors will make things easier, for examples when the device can recognize how far we have walked and the direction that our eyes are pointing.
4. Attention-getting
People are busier nowadays. They need to be informed on time and they want to see this information just within 3 seconds. These wearable devices then should be able to let them know about something, e.g. the upcoming meeting through a small screen that people can see on their wrist.
5. Always On
As information will be needed by the users anytime, so these wearable devices have to be always on.

Tom added that for wearable technology devices, these three devices below are the biggest on the sales or demands nowadays:
1. Fitness trackers
2. Head-mounted displays, e.g. Google Glasses and Oculus Rift
3. Watches

One wearable device that is very trendy and popular nowadays is Google Glass which was also exhibited after the talk in Ridehuset. Some of us might have not thought yet that Google Glass has a function that helps a doctor or being used in a healthcare, but it has! It has an ability to present the information or data about the patient; his name, age, blood type, allergies, and even the condition of his/her sickness at the time when the doctor is checking by doing scanning with Google Glass. Other than that, Google Glass can also help people with hearing impaired, since it has audio and video feedback feature.

Then what can we see in the future for wearable technologies, apart from more apps available in the market to be installed on them? Nils Kähler from Creative Vikings said that in the future we will be able to use smart watch to pay things when it is connected with the e-reader. And in the fashion side, we, as the users and the fans of technology might strap more things on our body, e.g. the smart watch on our wrist, the fitness tracker on the other wrist, Google Glass in our eyes, and there might be other devices that we will strap in our thighs or legs. Sounds like the next fashion trend? Maybe. Hopefully the guy sitting next to you in the train will not raise his eyebrow and ask too many questions.