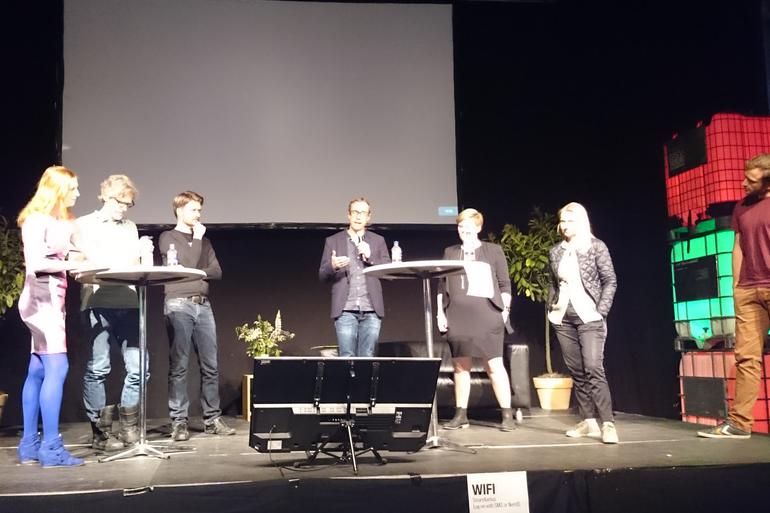 Digital establishment was on the agenda at Ridehuset. To discuss the concept and interpretation of digital establishment, representatives from Aarhus University, the IT business and Netværksgruppen were gathered to try predict the digital world in which a generation of children are raised.
Stine H. Tarp
FacebookLinkinTwitterGoogle+

Representative from University of Aarhus were professor Ole Sejer Iversen, Ph. D. Rikke Toft Nørgård, Ph.d. student Lis W. Skousen and Per Falkeborg, who were advocates of putting more IT in the schools. IT should not be a subject – it should be a component in all subjects of the timetables. A competence, children should master. They should know how to interact and how to solve problems via IT. The teachers should help the children bring the problem to the digital world and solve the tasks media wise.

This angle was further elaborated by an example of, how cross media platforms were used to plan, structure and carry out long distance collaborations. During an entire semester, group members at University of Aarhus had only met two times in real life. However, they knew each other virtually and this acquaintance was taken from the digital world into the real world.

Digital establishment should not forget the human side. Children should learn to be humans in the digital world, too. Children should know who they are as humans, even in the digital world. Parents were encouraged to design, collaborate and communicate with their children about this digital establishment process. An on-going process which never stops.

A representative of the parents and Netværksgruppen, Rune Gamborg was ready to let his children become more digitalised. He encouraged the different groups of society; the parents, the teachers, the politicians, the business world and even the freelance programmers to participate in the development of the digital establishment. He was ready to implement more IT and put programming on the timetable in schools.

Director of politics and communication in the IT-business, Mette Lundberg was approving of the support and focus which was put on IT. She agreed that more IT needs to be adapted into schools.

“We should not only be a nation of super users, but the creators of solutions for the future”

She reckoned, competent IT teachers were missing, why the schools might not be ready for putting programming on the timetables just yet. She compared programming to learning a new language, like English or German. Some might never become good programmers, however,they will get a basic understanding.

The business world is asking for more IT educated persons and the educational institutions are graduating more student within IT. Though, still 6 % of the newly IT graduated are unemployeed. Miscommunication could be the answer to this. Before finding a common language to use and a common platform to start from, the digital establishment might have a hard time to gain foothold.